Sorry for the huge delay.  We recorded this philmcast back in August around the release of The Dark Knight Rises.  Unfortunately we ran into some technical difficulties.  Now we have them resolved and still wanted to get this up before it was too late.  Well, it’s still too late, but oh well. Enjoy.

Finally the day has come. The Dark Knight rises is here.  Upon posting this question, we still haven’t seen the movie yet, but we’re just as excited as everyone else.  The final question: What’s next for the Batman franchise?

There’s a lot of speculation on what the future holds for the Batman series.  Will this be the end of the Dark Knight adaptation created by Christopher Nolan and Christian Bale? At this moment no one has any deals signed to continue and make any more films.  It doesn’t mean it’s not possible either.  Our 1st question of the week involved Joseph Gordon Levitt and the role he’ll have in this movie.  There are some theories out there saying he may be the next Batman. We also talked about the possibility of Batman dying, so is JGL the obvious replacement.  Will he play Robin in the future?   If that is the case; will it be directed by Christopher Nolan, or will we see a whole now reboot and series started up?  I’m also excited to see if they leave any hints as to the future.  Three movies is enough, don’t get me wrong.  I do want to see more villains though.  Imagine The Riddler, but he’s a more sociopathic version, darker, more mysterious and less goofy, like the bad guy from Saw.  How about Penguin and Mr. Freeze, can we expect to see them in the future?

People obviously liked these versions of Batman better than the over the top comic book versions Joel Schumaker directed.  If they continue to make them, people will go.  Keep any eye out for clues, hints or any tidbits too see where it goes from here.  Either way it’s not the end of Batman all together.  It’s one of the most beloved comic books and series in American culture.  It’s more  matter of time and if we have to wait ten years for a whole new reboot and series to start up. 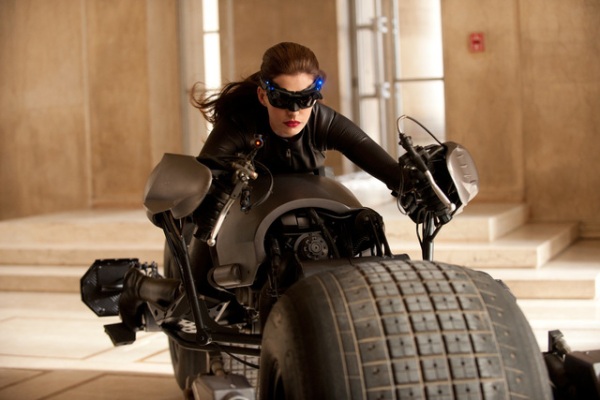 With the premiere of the newest Batman just days away, Philm Critics has decided to countdown to the big day by asking the 5 most interesting questions surrounding the Christopher Nolan Batman trilogy. Questions that may or may not be answered in the epic conclusion known as The Dark Knight Rises.

What Role Can We Expect Selina Kyle/Catwoman To Play?

Throughout Batman’s history, the character of Selina Kyle has been one of the most intriguing, yet mysterious relationships that Bruce Wayne/Batman has had. The character actually made its debut in the Batman universe in the first ever comic book, Batman #1 (if you have a copy and you’re feeling generous, I know a few nerds at Philm Critics would would gladly accept the donation). Judging by all the pre-release hype and the trailers it looks like Anne Hathaway’s rendition of the legendary villain will be an interesting take on Catwoman. Will she assist Bane in his plan to destroy Gotham? Will she have a romantic interest with Bruce Wayne? Will she help Batman on his quest to stop Bane? Honestly, it will probably be a combination of all of  these, but the biggest question is what side will Selina/Catwoman lean towards in the end? Yet another question we will have to wait to get answered on Friday!

P.S. Can’t say we aren’t excited to see Anne Hathaway in that leather suit in IMAX!

Our second philmcast is complete and posted.  We review a few films we saw in theaters recently including; The Amazing Spiderman, Abraham Lincoln Vampire Hunter and Seeking a Friend for the End of the World.  Also, we look ahead to The Dark Knight Rises coming out at the end of this week.

It’s also Dark Knight Rises week, where we will dedicate every day to a post about The Dark Knight and answer a few questions we have about the series.  SO STAY TUNED!